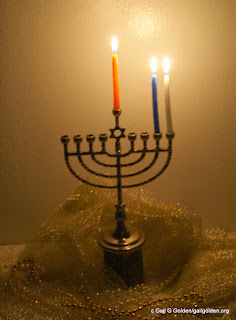 This post is part of the series 8 Gifts of Chanukah.

The actions of the Maccabees left us an example of great COURAGE in action. When the officials came to Modein, the home of the Maccabee family, and demanded worship of, as well as a sacrifice to, the pagan gods, everyone around them bowed their knees in submission. Not the Maccabees!

Mattathias was an old man with five sons.  This tzaddik (righteous man) had reared his sons to obey the Torah, and they all stood together in agreement with their father's bold statement: "My family and I will always keep the promises our ancestors made to G-d.  We will never give up our faith or disobey even one of G-d's laws.  We will not obey Antiochus." (1 Maccabees 2:19-20)

A fellow Jew stepped forward and said he would offer the required sacrifice.  Mattathias immediately killed that man and the spokesman for Antiochus, and then destroyed the sacrificial alter.  He and his sons left their home and all of their possessions to hide in the hills in preparation for war.  This family of brave men fought many battles against their enemy and eventually won complete victory over the pagans.  Jerusalem was re-captured by the Jews, and temple worship to ADONAI was restored.

What an example these men of COURAGE are for us today.  Instead of giving in to fear, they kept their belief in Hashem and continued to obey Him.  Yes, it cost them a great deal, but they were willing to pay that price.  Victory was not easy, but it came.

I've heard my husband say many times, "There is a very fine line between being a coward and standing up against evil.  COURAGE is a decision."

I pray for myself, my family, and all believers to have the COURAGE of the Maccabees to stand up against all efforts to turn us away from worship and obedience to ADONAI.

** This is a repost of an earlier writing

You can learn more about Chanukah in this series from last year:  8 Days of Chanukah
This is how we combine Chanukah with a celebration of Yeshua's birth:  Christmas Unplugged