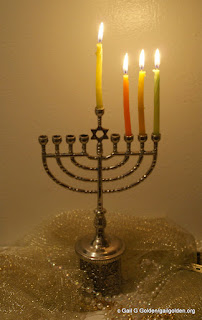 This post is a part of the series 8 Gifts of Chanukah.

Tonight, the third candle is lit on the menorah and we continue to remember the story of the Maccabees.

After the armies of the enemy were defeated, the Jews returned to Jerusalem and reclaimed it in the name of ADONAI.  Their holy Temple lay in ruins, with burned walls and waist-high weeds.  The worst part was the idol that bore the face of Antiochus  They mourned, wept, ripped their clothes, and threw dust on their heads when they saw these sights.

That picture of passion for ADONAI'S house touches my heart.  Even though their task was difficult, these people showed their FAITHFULNESS to ADONAI'S Word and His Ways.

Even though their grief was heavy, they immediately set about cleansing and restoring the Temple.  The pagan alter and idol were removed. (1 Maccabees 4:44-46). They were FAITHFUL to ADONAI's instructions in the Torah about how things were to be done.  A new, holy alter was built and preparations were made to rededicate it to the L-rd.

They found one container of oil  in the Temple that was unpolluted.  This was evidenced by the priest's unbroken seal.  Unfortunately, the cruise  held only one day's supply of oil.  They poured the holy oil into the lamp stand, lit the flame, and went about their Temple business.  Imagine their amazement and JOY when the oil did not run out!  The holy oil lasted for eight days until a new supply of oil could be consecrated.   This is why we say about Chanukah, "A great miracle happened here."

Each year as we read through the Torah, I am struck by the detailed instructions G-d left for us to follow, not only for His Temple, but also for our lives, which is where He lives now.  His laws had been recorded and studied and obeyed by men who were FAITHFUL.  These FAITHFUL ones believed G-d, and they obeyed no matter how time consuming and difficult those instructions were.

The actions  of the Jews who rebuilt and consecrated the Temple are an example to follow.   What ADONAI asks of believers today is minuscule compared to what was required of those who've gone before us.  The New Testament book of Hebrews talks about their FAITHFULNESS, and did you know that Yeshua (Jesus) celebrated Chanukah?  I'll be talking about that in future posts in this series.

I pray that I, my family, and all believers will remember to follow G-d's instructions (not a man's, a religion's, or a denomination's), and that He will commend us for FAITHFULNESS when we stand before Him.

You can learn more about Chanukah in this series from last year:  8 Days of Chanukah
This is how we combine Chanukah with a celebration of Yeshua's birth:  Christmas Unplugged