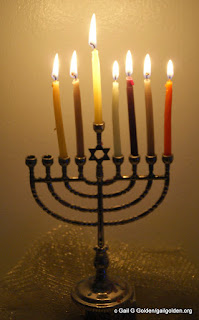 This post is part of the series 8 Gifts of Chanukah.

Tonight the sixth candle is lit.

For eight days, ADONAI performed the miracle of the oil.  Even though there was only enough oil for one day, it burned for a full eight days.  While it was burning, the Jews were preparing and consecrating a new supply of oil.  When that oil was ready, the Temple was DEDICATED to ADONAI.

Stop and think about this:  what if they had decided to just continue to let the oil burn and decided not to prepare and consecrate more?  But they did not.  They knew that ADONAI had instructed them to do things a certain way, and they obeyed without hesitation.  They also set an example for us to follow.

Each year at Chanukah, I'm reminded that ADONAI demands, and well deserves, holiness. He has certain ways of doing things that often don't make sense to us.  For instance this "strange fire" incident in Leviticus 10:


"But Nadav and Avihu, sons of Aharon, each took his censer, put fire in it, laid incense on it, and offered unauthorized fire before ADONAI, something he had not ordered them to do.


‘Through those who are near me I will be consecrated,
and before all the people I will be glorified.’

Yes, Aharon's sons had their own idea about how to do the Temple service, and it ended in their deaths.   Why?  Because ADONAI had told them how to do it, and He was serious.

Today, ADONAI has somehow become disassociated from the belief and worship of many people.  His holiness righteousness have been replaced with a "feel-good, anything- goes" message.  This message is all about "you" and your success and future and destiny.  This message is fleshly, self-centered and deadly. Like the strange fire incident, it is not ADONAI'S way of doing things.

ADONAI is full love love, mercy and grace.  He also full of holiness, righteousness and truth.  This verse is important to remember:


Mercy and truth are met together;
righteousness and peace have kissed each other.
(Proverb 85:10)


Chanukah reminds us that the oil was prepared and consecrated according to ADONAI'S instructions, and our lives are to be the same.  We are to live our lives according to His laws, which He has so lovingly recorded for our good.  It is from this concept that we say, "L-Chaim" which means "His Ways are Life!".

As the Jews RE-DEDICATED the Temple, Chanukah is our reminder to RE-DEDICATE our lives, our homes, and our service to Him in accordance with His holy, loving will and ways.


You can learn more about Chanukah in this series from last year:  8 Days of Chanukah
This is how we combine Chanukah with a celebration of Yeshua's birth:  Christmas Unplugged