Are you cooking like a mad woman?  I am, and I love it!  I always bring out my mama's recipe for southern style cornbread dressing with giblet gravy.  I'll be cooking that along with a roasted turkey, turnip greens with rutabagas, and sweet potato pie (Jem's favorite).  My daughter will be making Mama's broccoli casserole, her paternal grandmother's squash casserole, and her own yummy grape salad.

Tomorrow as we sit around her table (which I cherish), these traditions will bring back sweet memories of the  many holiday meals we've shared.  She's been gone for seven years now and my memories of her grow sweeter every year.  She was quite a lady and a wonderful cook.  Daddy never did like to go to restaurants, and why would he when he had the best cook in the world?

We had a wonderful experience this week.  We delivered food baskets with the Basket Brigade to needy families in our community.  The gratitude and joyful tears of the people we met really blessed our hearts.  We're going to make it a Thanksgiving tradition.

One of the things I'm thankful for on this holiday is that we still have a holiday that acknowledges God.  Growing up in the pubic school system, I was taught about the Pilgrims and how they thanked Him for the blessings of making it to a country with religious freedom.  I wonder if that's sstill being taught today.  I read this very interesting article today about the history of the first settlers and their connection to Judaism.  Here's the link -  First Fruits of Zion

I've found FFOZ to be a great resource.  Check it out!

Some of the things I'm thankful for this year are:

I'd love to know what you'll be doing for Thanksgiving, and what you're thankful for.

Posted by Gail Griner Golden at Gail-Friends at 4:41 PM No comments: 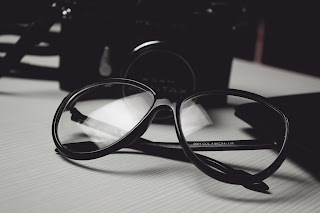 This Facebook article (below) spoke to me this week and I hope it helps you or someone who's struggling with distractions.   I'd been struggling with keeping up with all the things on my plate lately.  I prayed about this and God showed me several things to do.
First, I looked at all of the duties I have as a wife, mother, grandmother, rebbetzin, artist, and writer.  I decided to give up some of my duties at the synagogue.  This helped tremendously.  God bless the members of our congregation.  They have such tender, willing hearts to help us and others.  We are blessed to have such a loving family.
Taking the many synagogue duties off my plate has allowed me to have much more clarity so that I can now focus on my writing.  I have six books that are critiqued, edited, and ready to format for publication.  I'm also working on a project about my paternal grandmother that I'm enjoying greatly.  And I have a book that I illustrated over thirty years ago that I ran across when I was organizing my writing files!  I'm really excited about that project.
The second thing I've done is to write a daily, weekly, and monthly list of things to do.  I learned as a Mary Kay sales director to analyze that list and decide which were the six most important things I'd listed.  After my daily quiet time, I start with number one on the daily list and don't stop until the six things are done.  Yes, there are times I don't finish the list.  No worries!  I just put that thing as number one on the next day's list.  This works.
The third thing God showed me was to stay focused.  Maybe I have a touch of ADD, but I can think about as well as do several things at one time.  I'm learning to write the idea down for later instead of losing focus on the most important task at hand.
The final thing is to put my phone on silent and stay off the internet.  Talk about distractions! These are the worst.  Another thing I learned in Mary Kay is to be proactive instead of reactive.  My focus has to be on the important, not the distraction. So, I'm learning to be like my dear, sweet husband who checks his mail and internet priorities twice a day only.
This article by Nancy Campbell was a confirmation that God was guiding me.  He is a good and faithful father who answers our prayers and guides us when we come to Him with our problems.
ARE YOU FOCUSED?
by Nancy Campbell of Above Rubies
(used by permission)
In order to counteract distractions this we must get into the habit of becoming disciplined and focused. How can we FOCUS? I'll share an acrostic with you, and as I do, I'll point three fingers back at me!
F FOLLOW the Lord closely. Don't lag behind where you are too far away to hear His voice. When distractions get in between you and the Lord, be ruthless and shove them out of the way. What are the things that you have allowed to come in that have dimmed His voice? Are you a Facebook timewaster? Addicted to movies? Whatever it may be, take stock and discipline your time. Stipulate what time you allow yourself to use your electronics.
O OPEN your heart to the Holy Spirit instead of all the media and technology all around you (James 4:8). Open your heart to God's Word, which means you must discipline yourself to read it.
C CALL upon the Lord to help you (Romans 10:13). You can't do it in your own strength.
U UNDERSTAND your calling (Ephesians 5:17). If God has blessed you with children, motherhood is your highest calling. The devil will tempt you to get involved with so many extra "good" things, but they will weaken your power and influence as a mother.
S SIMPLIFY your life. The more stuff you have the more it fills up your life, and the more work it takes to look after it all. Get rid of everything you don't need (more fingers pointing back at me)! My daughter, Evangeline, loves to say: "I'm not wasting my time running around after stuff; I'm using my time for God and my children." But it's not only material stuff we must throw out. It's all the time-wasting hours we spend on so many other things. Knock off some things you are involved in. Go out less. Focus on the important. Eliminate the less important. Discipline your life.
Keep focused. Blessings from Nancy Campbell
P.S. Read these Scriptures: Numbers 14:24; Psalm 57:7; 63:8; 108:1; Proverbs 4:25-27; 16:32; 25:28; 1 Corinthians 9:24-27; Philippians 3:12-14; and Titus 2:12.
Posted by Gail Griner Golden at Gail-Friends at 4:40 PM No comments:

The Struggle Makes You Stronger 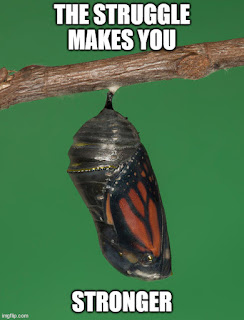 Years ago, I read the story of a man who found a butterfly struggling to get out of its cocoon.  He took the cocoon home and put it on his desk where he could watch the butterfly emerge.  He could see the mighty effort being made for release, but it seemed the butterfly needed help.  So, he took a tiny pair of scissors and cut the cocoon open very carefully, releasing the butterfly.  It tried to walk, but was unable to do so.  Its wings were matted together, making them useless to fly.  The butterfly died.

The man found out later that the struggle to get out of the cocoon was vital to the life and strength of the butterfly.  The process, though painful looking, had to play out in order for it to survive and thrive.

Over time, I've realized that we are the same.  Struggles develop our faith and character IF we understand that God is doing something in our lives.  When we surrender the situation to Him, He will teach us powerful lessons - things no one can take away from us.

I know this about my own life.  However, I sometimes forget that about my loved ones.  My personality is that of a fixer - a rescuer.  I want to protect them from pain.  But, like the butterfly, that can be damaging.  This week, I read something on a blog that really spoke to me on this point.  I hope it will help you if you relate.  This is powerful:

I would have pulled David out. Out of Saul’s spear-throwing presence. Out of the caves he hid away in. Out of the pain of rejection. And I would have cheated Israel out of a God-hearted king.

I would have pulled Esther out. Out of being snatched from her only family. Out of being placed in a position she never asked for. Out of the path of a vicious, power-hungry foe. And I would have cheated a people out of the woman God would use to save their very lives.

And oh friend. I want to pull you out. I want to change your path. I want to stop your pain. But right now I know I would be wrong. I would be out of line. I would be cheating you and cheating the world out of so much good. Because God knows. He knows the good this pain will produce. He knows the beauty this hard will grow. He’s watching over you and keeping you even in the midst of this. And He’s promising you that you can trust Him. Even when it all feels like more than you can bear.

So instead of trying to pull you out, I’m lifting you up. I’m kneeling before the Father and I’m asking Him to give you strength. To give you hope. I’m asking Him to protect you and to move you when the time is right. I'm asking Him to help you stay prayerful and discerning. I'm asking Him how I can best love you and be a help to you. And I’m believing He’s going to use your life in powerful and beautiful ways. Ways that will leave your heart grateful and humbly thankful for this road you’ve been on.”

I would add this:  I would have probably chased after the prodigal son.  Paid a detective to find him if I couldn't.  Paid his bills, etc.  Done everything to keep him from going through the painful lessons he needed to learn.

The prodigal's father didn't do any of those things.  He waited.  He waited in faith - looking down the road, expecting his son to come home.

His son had to suffer.  Living in a pig pen is pretty low for a Jewish boy!  But that suffering brought him to his senses.  He went back to his father's house, and he didn't bring the pig pen home with him.  He learned his lessons through the things he experienced.

I've learned mine, too.  God's in the business of working with people to teach and shape them into His image.  IF he needs my help with my loved ones, He'll let me know.

Posted by Gail Griner Golden at Gail-Friends at 8:04 PM No comments: