Philippians 2:5
Let this mind be in you, which was also in Yeshua (Jesus)

This verse has been on my mind for the last few days.  Our thoughts are so important.  The scripture also says, "As a man thinks in his heart, so is he."  So this begs the question:  would G-d /Yeshua think the way I'm thinking?

I've also been thinking about how the scripture says, "G-d is the same, yesterday, today, and forever."  Yeshua is G-d in the flesh.  The same G-d in both Old and New Testaments.

As a young woman, I wanted to go to a synagogue.  I didn't get to visit there until I was in my 40's.  I was shocked to see that the inside of the synagogue looked like a church.  There was a stage (bema) with a curtain on the wall behind it.  I thought, at first, that this was a baptismal pool, but found out later in the service, it was the ark where the Torah scroll was kept.

That visit began my study of Judaism.  I visited Israel and was forever changed by the things I saw there.  My heart was knit to that land and to the people.  I never expected it to happen, but I'm so glad it did.  My continued search for wisdom led me to a study of the Old Testament, particularly of Proverbs, and then an in-depth study of the Torah.  Who knew this search would lead me to my own personal rabbi?  My dear, sweet husband, Rabbi Jem and I were married five years ago.

Being married to someone who "walks the walk" is both wonderful and disconcerting.  All of my life I've associated with people who "talked the talk", but didn't live it out.  My husband rarely discusses the scripture or G-d outside the bema, but he lives it like no one I've ever known in my life.    He lives the Sh'ma (Deut. 6: 4 - 9), as well as the second greatest commandment (Leviticus 19:18)  Jem loves G-d with his whole being and his neighbor as himself.  He is always conscious of obeying G-d and of looking for someone to help.  He calls it "doing the right thing".


Which takes me back to the scripture quoted at the beginning of this post.  What mind did Yeshua have?    Yeshua was G-d in a human body.  He didn't change.  He is the same G-d who created the world and everything in and around it.  He is the G-d of the Tanach (Old Testament):  The Torah, the Prophets and Writings.


The study of Torah has shown me G-d's mind....and therefore Yeshua's mind.    I find no conflict between the Old and New Testament when viewed through the lens of the Torah. My study of Torah has given me a discernment I never had in all my years of studying the Bible. Now I understand things Yeshua said that before puzzled me.


Many times, I've heard people say, " I want to be like Jesus".  Well then, beloved,  stop and think -  Yeshua is Jewish,  and during his time on earth He studied the Tanach.  There is much to be learned through Judaism and Torah study.  I know there are those who will say, "that's legalism".  I don't see it that way because G-d preserved His Word over thousands of years for our benefit.   And how can we say we love G-d and completely ignore the very laws that bring us life?    Blessings flow to those who obey Him.  His love is revealed in His Word and I am so thankful to be in His Secret Place.

Psalm 91:1
He that dwelleth in the secret place of the Most High shall abide under the shadow of the Almighty.

I'm linking up to Spiritual Sundays  and Brag On God Fridays
Posted by Gail Griner Golden at Gail-Friends at 9:42 PM 9 comments:


I've never been a history buff, but I married one.  My husband, Rabbi Jem Golden, is like a walking, living, breathing history book, complete with dates no less. 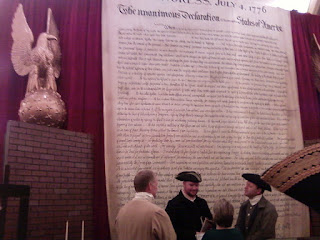 Jem often speaks to groups, and I wish you could hear him speak of his fervent, passionate love for America.    He is very proud of the fact that men in his family have fought not only in the War for Independence, but in every war America fought up through his own two tours of duty in Viet Nam.  These brave men in the Golden family not only fought for Americans' freedom, but also for the freedom of those in foreign countries.  I'm very proud of my own family's history in America's wars.

When we married five years ago, I'd never attended a patriotic parade, and quite honestly knew very little about the history of our country.  My husband educated me and I began to develop a desire to know more. I started to research not only my country, but also  those patriots who fought for our freedom and formed our founding documents:  The Declaration of Independence, our Constitution, and the Bill of Rights.

Because of the study both Rabbi Jem and I have done, we are both energized to educate others about the history of our country, especially as it relates to it's Judeo-Christian roots.  We are energized because we see a deliberate effort to remove the facts of that heritage from our children.  We are soberly aware that there are those who would like to strip not only the history of the influence of the Scriptures on our culture, but also to remove the influence of the Constitution from our government entirely.

Recently, we attended a public reading of the Constitution. Each person attending received a small, personal copy of the Constitution in booklet form.  A different person read each section while the audience followed along. The reading of this document was disconcerting because I recognized not only how precious these freedoms are, but also the devious efforts afoot to remove their protections.  I took an oath that day to defend the Constitution.

Are you aware that every member of the military takes an oath to defend the Constitution?  Our governing members of Congress, our Senators, as well as our President also take that oath.  Within the last year, the members of Congress did a pubic reading of the Constitution on the House floor.  Some members were outraged and voiced their anger saying it was a waste of time.  Others refused to attend.  There is also a move among government officials to remove the Constitution and Bill of Rights as guiding documents because they are "archaic" and "irrelevant" to life in our modern society.  These are dangerous ideas.

I want to encourage you to study the documents mentioned above for yourself, while noting the references to Divinity.  An excellent resource to find and read these and other historical documents is  Wall Builders.  I hope you will open up this treasure chest that reflects the Judeo-Christian heritage of our country.  I am passionate about educating people on these facts.

While researching the U.N.'s Agenda 21, Jem and I learned of plans to change the way history is taught in public schools.  The plan is to begin history education at the post-Civil War period.   You may scoff at such an idea, but hear me out.

Recently, I had my nails done in a salon operated by a  young Vietnamese couple.   I told them my husband had fought in Viet Nam.  They had no idea what I was talking about.  Both, in their twenties, had not been taught this in school or by their parents.  I also watched a television documentary recently about Germany which stated that public school students are not taught about Hitler, the Holocaust, or the country's part in World War II.  That is frightening, because the same thing is happening in America.

Our country's heritage is rich with the influence of men and women who not only believed in the Bible, but applied it's teachings in forming our country.  I hope you will research this yourself, and join the fight to keep these principles in the forefront of our policy making for the future.  You may be called politically incorrect, but you will be "fully" correct and will know how to support your beliefs with the facts.

I'm linking up to Spiritual Sundays
and GratiTuesday

Posted by Gail Griner Golden at Gail-Friends at 6:01 PM 4 comments:

One of favorite blogs is Gina's Shabby Chic Cottage.  I love the shabby chic style of decorating, and Gina's is one of the best to visit for inspiration.  You'll notice her blog is listed on the left side of my blog as one of my favorite links. 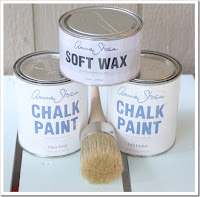 Last week, I entered a drawing on Gina's blog for Annie Sloan Chalk Paint, and I won the drawing!  Two cans of paint! (thanks, Gina!) I chose the  Old White and the Duck Egg Blue.  I'm in love with this paint because you do not have to clean or sand the piece before you paint it.  The finish and colors give an old, vintage look, which is what I love.  My plan is to paint my oak dining set with the white, and to paint some accent pieces in my living room with the blue.

I hope you'll visit Gina's blog The Shabby Chic Cottage to see the project she did with the paint.  Also, visit Periwinkle Pass  which provided the paint for the giveaway (thank you, Tammy!) to see more projects, the colors available, and how to purchase the paint if you're as excited as I am to try it.


Also, be sure to check out Gina's  Transformation Thursdays blog party. (Be sure to scroll on down to see all of the party participant's projects.)  That's where I'll be posting the before and afters of my projects.  I love to visit this party because I get so many ideas.  Only problem is:  so many projects, so little time!

I hope ya'll are having a wonderful 4th of July weekend.

Posted by Gail Griner Golden at Gail-Friends at 7:30 PM 1 comment: