Update on my absence

I am recovering from major surgery two weeks ago.  Praise Hasham, everything went very well, but am having to take it easy for six weeks of healing.

For several weeks prior to the surgery, I was like the white tornado - cleaning everything in sight.  I don't know about you, but when I go on a trip or have to go to the hospital (like when having a baby), I HAVE TO CLEAN!!!

My wonderful husband has been so sweet and kind in nursing me.  He has to help me up and down, give me shots daily, and change my dressing.  He used to be an EMT, so he was well prepared to be a nurse.  G-d bless him.  He's also done EVERYTHING else around here.  I love him so much!

Hopefully, within the next week I will have something to write about.  Until then, please keep me in your prayers as I recover. 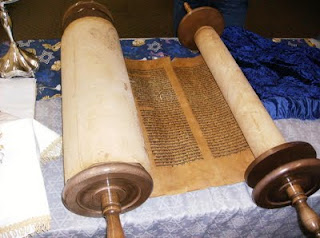 Heaven and earth shall pass away, but my words shall not pass away. Matthew 24:35

Our long awaited package from Israel had finally arrived! Eyes glistening with tears, Rabbi Jem’s hands shook as he opened the carefully wrapped package. Tenderly, he lifted the precious 350-year old Torah scroll from its’ wrappings. Rabbi Jem and I unrolled the scroll and marveled at the soft dear skin parchment and the beautiful precision of the Hebrew letters. We both were overjoyed because the scroll arrived just in time for our Messianic synagogue’s celebration of Shavuot. How appropriate.

Shavuot celebrates two things. First, we thank God for His blessings on the first of the summer grain crops (barley). The festival reminds us that without Him and His provision of sun and rain, we would not have food. Second, we celebrate the giving of the Torah (the first five books of the Bible) to the Jewish people. When this festival comes, there is great celebration because of our love and gratitude for the Scriptures. The giving of the Torah is God’s blessing, for the Word of God is our spiritual food. On the first day of Shavuot, we read the Ten Commandments from Exodus 20 to remind us of the Laws that give us Life. On the second day of Shavuot, we read the book of Ruth, which is the beautiful picture of Yeshua (Jesus), as our Kinsman Redeemer.

As Messianics (believers in Yeshua as Messiah), we also celebrate Shavuot as the day when the Ruach Hakodesh (Holy Spirit) descended on the believers in Yarushalem (Jerusalem). In Acts 2, you will see how Jews from all over the world were assembled for Shavuot. The Spirit came down, appearing as tongues of fire upon their heads, and they all spoke with other tongues (languages). Thus, the Good News about Yeshua was given to people in their own language. Believers received the indwelling of God, and His Word was written on their hearts. He came inside the believers, and gave them power to be witnesses all over the world and to spread the Gospel (Good News). Thus, these believers were the First Fruits of the Ruach Hakodesh.

As Messianic believers, on Shavuot, we celebrate the giving of God’s Holy Word, physically, and the coming of the Word into our hearts, spiritually. Shavuot is a powerful, visual reminder that God’s Law is important to our lives, and that the power to live that Word has been given through the Ruach Hakodesh. No longer does it need to be hard to follow and obey God, because He, Himself, indwells us to give us the desire and the power to follow and obey.

That night, at our synagogue, we celebrated Shavuot and God’s blessing us with our own Torah scroll. Rabbi Jem explained how many years it takes a person to prepare to write a scroll, and how it can take an entire year or more to actually write. We were in awe to learn that a modern day scroll compared to a 1000 year old scroll would be exactly the same. Not one jot or tittle (the very tiniest Hebrew letters) would be different. We thanked God for His Word, and for the faithfulness of Jews who have preserved it for us.
Later, the scroll was carried on the shoulder of our very first congregation member. We followed behind, dancing and singing with joy, waving flags and banners, and rejoicing that God favored us by giving us His Torah, and that He lives within our hearts.

You can see pictures of our celebration of Shavuot 2009 at our website photo gallery:Ma'gen Da'vid Messianic Synagogue - Shavuot Celebration

I'm linking up to Spiritual Sundays
Posted by Gail Griner Golden at Gail-Friends at 8:16 PM 10 comments: