Click on this link to see how I lost 90 pounds. Yes - it really does involve chewing tobacco....
http://www.christianitytoday.com/tc/2007/julaug/3.31.html
And - check out my book Girl Gab at the link on the left.
Posted by Gail Griner Golden at Gail-Friends at 10:40 PM 1 comment:

Why I started blogging 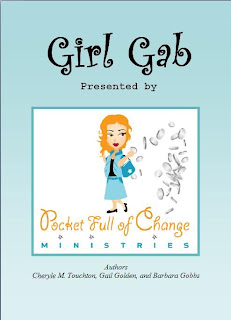 Discipline - plain and simple. I wanted to discipline myself to write consistently. There is so much I want to write and think about writing, but don't ever get around to actually writing. So, I started this blog to regularly capture some of that stuff running through my head.

As a published writer, I know I can sell my work when I market it. I hope to use these musings as springboards to articles and/or books, and then market them. Here is a link to one of the stories I've published:
The Chewing Tobacco Diet - http://www.christianitytoday.com/tc/2007/julaug/3.31.html

I've published a book, called Girl Gab, which has some of the articles I've written in the past. The book is $8.00 plus $2.00 shipping and handling. E-mail me at gail.golden@yahoo.com if you'd like a copy.

Hopefully, another book will be published this year containing stories, poems, and drawings.

I'd love to hear from you when you visit, so please leave a comment. And, if you'd join as one of my followers, that would be the cherry on the top!!! Let me know about your blog, and I'll stop by for a visit.
Posted by Gail Griner Golden at Gail-Friends at 5:29 PM 1 comment:

The Bible says in Psalm 1:1 - "Blessed is the man that walks not in the counsel of the ungodly, nor stands in the way of sinners, nor sits in the seat of the scornful." I am blessed because God's Word is my final authority. I have learned not to take counsel from people who scorn God's Holy Word. If someone says, "I know the Bible says that, but..." run, don't walk, away from that person. That person is a sinner and ungodly - they have scorned God's Word.

Verse 1b says of the blessed person: " But his delight is in the law of the Lord (Torah); and in His law (Torah)doth he meditate day and night." Yeshua (Jesus) did this. The New Testament had not been written.

Meditating on Torah blesses me because it is the way of Life and God's instruction manual for success on earth. Everything Yeshua said and did was living out the Torah. He showed us how to walk in obedience to the Father. He was the Father, in the flesh, on earth.

Every time we take the Torah out of the ark and parade it around the synagogue, we are reminded to keep our eyes on God's Word by following it with our eyes around the room, kissing it, and never turning our backs on it. Yeshua never turned His back on the Torah. He lived it, and said, "I did not come to do away with the Law (Torah), but to fulfill it (Torah)."

Verse 3 says, "And he shall be like a tree planted by the rivers of water that brings forth his fruit in his season; his leaf also shall not wither; and whatsoever he does shall prosper." What a blessed promise. I know that because I obey God, He will cause me to prosper. Now to the world that means wealth, but that's not it. Prosperity means success in the place I am planted, bearing fruit for His kingdom, by obeying Him.

Many didn't think Yeshua a success. He was hated, accused, killed and buried. But that's not the end of the story. He rose again with victory!

Obeying God sometimes means being hated, accused, and can often cause the loss of wealth, friendship, position - even life. Again, that's not the end of the story. God sees and rewards His chosen ones in ways the world often does not see or understand. He knows the fruit being born for His kingdom and He is pleased.
Posted by Gail Griner Golden at Gail-Friends at 2:12 PM 1 comment:

I always get mushy on Mother's Day because I love being a mother. When I was about five years old, I asked my mother, "Mama, do you have to be married to have children?" She said, "No." I said, "That's what I want to do." I loved babies, even at that young age, and knew I wanted to be a mother. Other little girls I knew wanted to be nurses or ballerinas. I always said I wanted five children.

When I married at 17, I wanted children right away, but had to wait a while. I lost a baby through miscarriage four years later, and it broke my heart. My first daughter, Melissa, was born when I was 22 and I'll never forget my first glimpse of her. I felt she was an angel dropped straight from heaven. I loved being a stay at home mom, and kept her looking like a living doll every minute of her life, decked out in bows and ruffles galore. I rocked her to sleep every night of her life till she was six years old. In the mornings, and after her naps, I used to stand by her bed, hoping she'd wake up so I could hold her and play with her. She was an easy child to raise and never gave me any problems. Her happy, outgoing nature led her to never meet a stranger and light up a room just by walking in it. Melissa was and is to this day a joy, and I thank God for giving her to me.

Amanda, my second and last child, came along when Melissa was six. Her first year was rough, with sickness and several trips to the hospital. I don't think she slept through the night till she was six years old. Instead of praying she'd wake up, I prayed for sleep - for both of us. I look like a drunk in most of her baby pictures, always from lack of sleep. Amanda was a challenge to raise with her strong will and determination. Many days I cried because of having to discipline her "one more time" for the same disobedience. But, she turned out great! That strong will was channelled into artistic creativity and after that, I just had to hang on to her coat-tails and enjoy the ride. She, too, is a joy, I am so thankful for her!

As a young mother, I read a book that asked me to write down my goals. I couldn't think of one. My goals were met: I had two beautiful children. What more could I want? As I seriously considered this question and prayed about it, I did set some new goals.

I prayed to be able to afford to stay at home with my girls without working outside the home. God helped me have a home-based business, and then part-time jobs for 27 years to accomplish that goal.

I prayed for my girls to accept, love, and obey Yeshua (Jesus Christ). Goal accomplished!

I prayed for my girls to marry godly men who would love them like Yeshua loves the church, and that they would be godly wives and mothers. Goal accomplished! My girls have wonderful husbands and are good wives who love their husbands and their homes. Amanda will celebrate her first Mother's Day this year, and she is such a good mother.

So, my heart is full this Mother's Day - my first as a "Grandmother"! I love my little grandson, Jonathan, so much, and cherish every moment with him, my girls, and my sons-in-love. I love them like my own. I even reached my goal of five children - my girls plus their husbands, and now Jonathan - that makes five! Thank you, Lord!
Posted by Gail Griner Golden at Gail-Friends at 9:56 PM No comments:

"God leads by stops as well as starts." A wise woman told me this years ago. It was a new thought for me, but I considered it a word from the Lord and I took it to heart. The statement has become a touch-point for my life. God taught me a lesson through her words that has helped me through the years.

Recently, I happened on a great big stop sign. It was not just red, it was neon red with flashing lights and sirens. STOP! DON'T GO ANY FURTHER. I've learned to follow the signs, so I stopped and prayerfully considered the path I was on. To everyone around me, this path looked good, but in my heart I knew God was telling me to get off it.

This stop involves big changes in my life and a great loss. It involves disappointment. It involves grieving. It will take a while to work through the sadness. I've been through similar stops before. One thing I've learned with the Biblical character, Job, is that God gives and He takes away. And I can say, with Job, blessed be the name of Lord.

I'm reminded of the time, years ago, when I tried to sell a house. No matter what I did, the house would not sell -so I gave up and placed the house as a rental. Five years passed and when I put the house on the market, it sold within the first week. Looking back, I realized it was much better for me that it hadn't sold earlier.

Over many years, I've learned that I can trust God to lead me, so I mind the stops. I'm taking a rest to seek His face and His will, asking Him for knowledge of His will and His power to carry that out. I know His way, and His path is perfect, holy, and pure....and that walking His path brings peace.
Posted by Gail Griner Golden at Gail-Friends at 9:00 AM No comments: