America in a Nutshell

This is a Readers Digest version of what’s happening right now in America! But I'm still hopeful...and I will continue to pray, take action, and believe there can be a bright future for my beloved country.  Be sure to click the link at the end of this post.
AMERICA IN A NUTSHELL
(author unknown)
“This morning, I realized that everything is about to change. No matter how I vote, no matter what I say, lives are never going to be  the same. I have been confused by the hostility of family and friends.
I look at people I have known all my life so hate-filled that they agree with opinions they would never express as their own. I think that I may well have entered the Twilight Zone.
You can't justify this insanity. We have become a nation that has lost its collective mind. We see other countries going Socialist and collapsing, but it seems like a great plan to us. Somehow it’s un-American for the census to count how many Americans are in America.
People who say there is no such thing as gender are demanding a female President.
Universities that advocate equality, discriminate against Asian-Americans in favor of African-Americans. Some people are held responsible for things that happened before they were born, and other people are not held responsible for what they are doing right now.
Criminals are caught-and-released to hurt more people, but stopping them is bad because it's a violation of THEIR rights. People who have never owned slaves should pay slavery reparations to people who have never been slaves. After legislating gender, if a dude pretends to be a woman, you are required to pretend with him.
People who have never been to college should pay the debts of college students who took out huge loans for their degrees.
Immigrants with tuberculosis and polio are welcome, but you’d better be able to prove your dog is vaccinated.
Irish doctors and German engineers who want to immigrate to the US must go through a rigorous vetting process, but any illiterate gang-bangers who jump the southern fence are welcomed. $5 billion for border security is too expensive, but $1.5 trillion for “free” health care is not. If you cheat to get into college you go to prison, but if you cheat to get into the country you go to college for free. And, pointing out all this hypocrisy somehow makes us "racists"!
Nothing makes sense anymore, no values, no morals, no civility and people are dying of a Chinese virus, but it is racist to refer to it as Chinese even though it began in China. We are clearly living in an upside-down world where right is wrong and wrong is right, where moral is immoral and immoral is moral, where good is evil and evil is good, where killing murderers is wrong, but killing innocent babies is right.
Wake up America. The great unsinkable ship Titanic America has hit an iceberg, is taking on water and sinking fast and we need all the help we can get!!!
~~~
This is heart-breaking, but true.  We must not be complacent, Gail-Friends.  Please read my previous post HERE.
The graphic up top is used by permission from the lovely Little Birdie Blessings

Posted by Gail Griner Golden at Gail-Friends at 9:36 PM 2 comments:

A Call to War 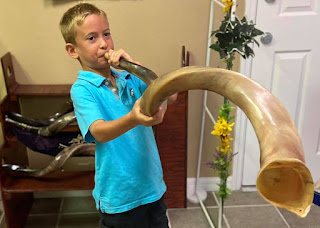 I know many are afraid of what's happening in our country.  But, remember that God has not given us a spirit of fear, but of power, of love, and of a sound mind. (2 Timothy 1:7). We cannot just sit back, wring our hands, and worry ourselves sick.  This post will show how we can take action.  Most importantly, we have mighty spiritual weapons to use in this war against humanity AND our country.
Spiritual warfare has been on my heart recently and I hope you will read my posts  HERE  and the article below.  There are things we can do that are not included in the following article, such as:
I hope you will read this whole article (including more at the link below it) and join us in prayer and action to defeat the enemy of our souls.
A Call to War
by Jamie Lash  (this is an excerpt from Jewish Jewels newsletter)

The shofar (ram's horn trumpet), spoken of throughout the Holy Scriptures, is sounded every day this month in traditional synagogues since August 2021 coincides with the month of Elul on the Hebrew /Biblical calendar. Elul precedes the month of Tishrei and is a month of preparation of the heart before the fall Feasts of the Lord. The shofar calls God's people to repentance.
The shofar is also a call to war. "When you go to war in your land against the enemy who oppresses you, then you shall sound an alarm with the trumpets (shofarot, show-far-OAT), and you will be remembered before the LORD your God, and you will be saved from your enemies" (Num. 10:9).
Last month, in obedience to the Lord, I wrote about two of the evil spirits that are warring against us in the U.S.A. at this hour in history: the lying, deceiving spirit and the antichrist spirit. The spiritual warfare, mentioned in Ephesians 6:12, is the scriptural basis of this war against demonic forces. My compulsion to continue expounding on our call to war is also based on another verse from Ephesians: "And have no fellowship with the unfruitful works of darkness, but rather expose them" (Eph. 5:11).
EXPOSE THEM. Plural. It was drawn to my attention recently that the world-wide pandemic was just beginning at the time of my husband Neil's unveiling (of a monument one year after his death). This was in March, 2020. No one wore masks yet, everyone was unsure about Covid-19, and the "pandemonium" had not yet begun (PAN-DEMONium, from the Greek for "all demon"). I consider
it a possibility that the enemy unleashed or at least stirred up a horde of demonic spirits during the pandemic of 2020, and they are harassing us now. The Lord wants to unveil them and give us victory over them, but we must be AWARE of them and ENGAGE in the battle against them. The End-time bride is destined to be a Warrior bride. Please be assured that we are not alone in the battle. God is ,)שופר with us. Take heart from Nehemiah 4:20, "Whenever you hear the sound of the trumpet (shofar rally to us there. Our God will fight for us."
READ MORE

Posted by Gail Griner Golden at Gail-Friends at 12:07 PM 2 comments: