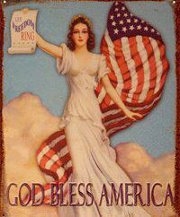 Independence Day, 2020 will always live in my memory as the best of my life.  On July 3, we watched President Trump give the most wonderful presidential speech I've ever heard.  His love and devotion to our beloved country brought tears to my eyes. He fanned the flames of my patriotism and they are burning brighter than ever.  His words inspired me to do everything I can to protect and preserve our history, our monuments, our flag, our Constitution, and the ideals upon which our country was founded.  Here's a video link to that great patriotic speech - President Trump at Mount Rushmore.

I think this speech should be seen by every American, and especially by children.  President Trump shares the amazing history of the four presidents whose faces are carved into the mountain.  I learned a great deal from his history lesson.  Here is a link to the transcript of President Trump's speech.  I encourage you to print it and share it far and wide.

This inspiring, patriotic speech was especially meaningful when you remember that Independence Day, 2020 was shrouded in anarchistic violence in the previous weeks.  Statues and monuments had been burned, defaced, and some completely destroyed.  Churches were even set on fire.  I was so proud of President Trump when he left the White House and walked to St. Johns Church (which was set on fire), stood in front of it, and held up God's Holy Word.  It's shameful to see the vulgar curse words spray-painted on the building across from the church.  Click on the link to see another example of the horrible damage: George Washington statue defaced.

All of this was done in response to the death of a black man in Minneapolis.  He was killed by a policeman.  It is tragic what happened to that man and I pray it never happens again.  But the conclusions some people have come to are equally tragic. Policemen have been killed in revenge.  Calls are now being made to defund the police.  Parts of cities are being taken over and held hostage by anarchistic terrorists.  It's all wrong and it's not going to solve the "problem".

What is the problem, anyway?  The problem is that our country has turned its back on God and His Holy Word.  We have left behind the Judeo-Christian principles upon which this country was founded.  My prayer is for a revival of those ideals.  God shed His grace on us because of that obedience to His Word.

I thank God for a president (who is under constant threat of harm and death) that has the courage and boldness to do what he did.  Think about it -- he had the courage to spontaneously walk out, in public, in the heat of this shameful period in our history, and stand in front of a church while holding a Bible.  What a statement.  That statement is clear:  GOD WINS!!! 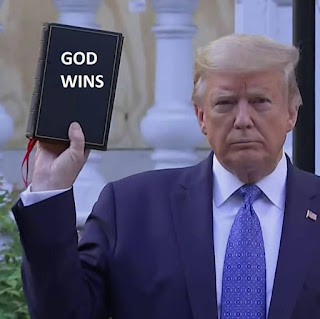 On July 4, we met with our mishpocha at synagogue for our weekly Shabbat service. In addition to our normal music and worship, liturgy, and Torah study,  Rabbi asked the question, "What do you remember as the best Independence Day in your life?"  It was interesting to listen to the different memories shared by the congregation.

My turn came, and I said, "I think the best was when Rabbi Jem and I got married.  He put out flags, flags, and more flags!  Big ones, little ones -- all over our yard."  Like this: 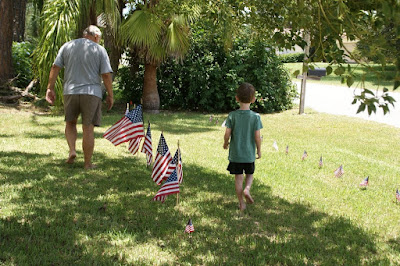 Every year, the number of flags increases.  I joke that when Jem gets a little bit of money, he buys flags.  He puts them out for Memorial Day, Flag Day, Independence Day, and Veterans Day.  Plus, we have a tall flag pole that flies the American Flag all year long.  We want everyone who passes by to know we love our country and our flag.

Speaking of love of the flag, one day a neighbor was walking by with her five-year old on his bike.  Jem was in the yard working with his flags.  The little boy stopped and said, "Mom.  Can I salute that flag?"  Both Jem and his Mom assured him he could.  That patriotic little boy put his hand on his heart and said the pledge of allegiance.  They joined in with him.  It warmed our heart to see a mother who is teaching her child to love his country.  Jem was so impressed that he gave him his own flag to put in his yard.

I'd love to hear about your best Independence Day memory or your love for the USA!

Party In Your PJs

.
Posted by Gail Griner Golden at Gail-Friends at 8:22 PM 4 comments: