The last holiday we celebrated prior to "the virus" was Purim.  America has gone through a tough time since then.  During Purim, we remember the courage of Queen Esther when she went before the King to save the Jewish people.  This passage has remained as a testament to her bravery, and a charge to believers ever since then:

"For if you fail to speak up now,
relief and deliverance will come to the Jews from a different direction;
but you and your father’s family will perish.
Who knows whether you didn’t come into your royal position precisely
for such a time as this.”
(Esther 4:14)
This phrase has echoed in my mind many, many times since Purim, and more insistently for the past month.  God has laid a heavy burden on my heart for my country and I know He wants me to share this post today.  One day, I was praying about this and received two confirmations from Him.
One confirmation was seeing a YouTube video about the "mantle" of Esther.  That same day, I received this gift from a friend: 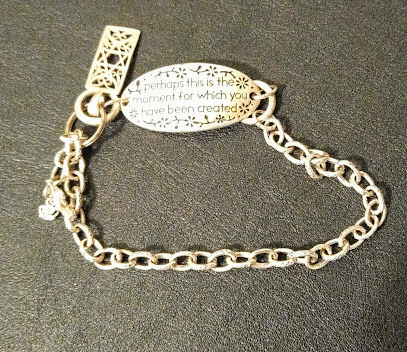 Like Esther, I am being called to go before the King on behalf of my people -- America.  We are in grave danger.  Complete destruction could be our fate.  I'll explain why.
First, I have to lay the groundwork of what has been happening in the world.  There is a plan called the New World Order.  I first heard this expression about thirty years ago in a book I read about the subject.  This plan is to have all countries unite as one, all with no borders. There will be one global government, and one supreme leader.  All will follow the same belief system and religion would be banned.  The United Nations plays a big part in this scenario.  The Book of Revelation in the New Testament of the Bible mentions it, too, and calls the supreme leader the Anti-Christ.
I heard President George H. W. Bush mention it at the beginning of the Gulf War.  I remember watching a news feed of rockets being fired  and was dumbstruck when I heard him say these words:
“Out of these troubled times, our fifth objective — a new world order — can emerge.” — President George H. W. Bush
Other presidents and U.S. officials have espoused their support of this new world order.  One is running for president right now:
“The affirmative task we have now is to actually create a new world order.” — Vice President Joe Biden (2013)
"I think that his [Obama’s] task will be to develop an overall strategy for America in this period, when really a ‘new world order’ can be created. It’s a great opportunity.” — Henry Kissinger
All of that to say this:  if you've been paying attention for the last thirty years, you have seen our country make a big shift.  The years under the Obama presidency, especially, saw a complete upheaval of Biblical values with far-reaching destruction.  In example: late-term and live-birth abortion, homosexual and transgender lifestyles support and promotion,  disrespect and violence toward the police, and wanton lawlessness have proliferated from his efforts.  These things are totally against God's Word and Ways.
Many Democrats are pushing globalism, socialism, open borders, and even a whole new constitution.  World leaders are heading in that direction.  Others, like the UK, however, have made the decision to back out of the EU, which is a very positive sign.
I sincerely believe we stand at a crossroads this very week, Gail-Friends.  America's decision about the presidency for the next four years is critical to either save or destroy America as we've known it.  A vote for Biden is a vote for the new world order.  A vote for Trump is a vote for the America based on The Constitution, and for the Biblical principles on which it was founded.
You and I, as believers in the One True God -- Adonai, and  in His Son, Yeshua the Messiah, are like Esther.  We were born for such a time as this.  But it's not only about voting.  It's about going before the King of the Universe.  We have to do what Esther did:
She believed in the One True God, the God of the Universe.  She knew about God, about His Word, His Ways, and His Holiness.
She believed in prayer and fasting.  She fasted for three days before she had audience with the King.
She prepared her spirit.  She took courage and strength from Adonai, seeking His face about when to go and what to say.
She didn't just pray, she added feet to her prayers and followed His leading.
I believe you and I are to be like Esther at this time in history -- for this election -- but also going forward.  I call you to:
Fast and pray from November 1 - 3.
Meditate on 2 Chronicles  7:14 (TLV)

When My people, over whom My Name is called,

and pray and seek My face

and turn from their evil ways,

then I will hear from heaven

and will forgive their sin

and will heal their land.

I'm sure you're familiar with this verse, but please pay attention to this part:  "turn from your evil ways".  This means return to Torah.  If you will read the preceding verses of the chapter, you will see that the people had turned their backs on the Torah. Many believers have done the same.  They don't even know they're sinning because they've been told "not to be legalistic, or under the law".
I challenge you, as you fast, to re-read the gospels of the New Testament and see what Yeshua said and did.  He obeyed the law and taught everyone to obey it.  He observed the seventh day Sabbath, kept the feasts and festivals, and attended the synagogue.  Research it yourself.  Most of all, He said,
If you love me, you will keep my commandments.
(John 14:15 CJB)
He was speaking of the Torah.
So, I say to you -- read, study, and obey God's instructions to you in the Torah (the first five books of the Bible).  This is so very important because we're in a spiritual battle.  A war between evil and good.  That war can be won only with spiritual weapons.  Hear this very clear and important verse:
Those who abandon Torah praise the wicked,
but those who keep Torah fight them.
(Proverbs 28:4 CJB)
I said earlier we have to be like Esther in this election AND in going forward because the battle will not be won when Trump is elected.  We have to stand up and be Esther every day.  We have to be obedient to God in every way in order to turn this country around.  We have to speak to people and tell them the truth.  We have to talk about sin.
Oh, you might be thinking but that's judgmental.  No, being judgemental is when you watch someone going over a cliff and do nothing to stop them.  God calls us to be righteous judges, living holy lives, and pointing others to a life of obedience.
Oh, but you might be thinking where's the love?  Adonai is a loving God, but He is also the God of truth and justice.  This verse is important:
Grace and truth have met together;
justice and peace have kissed each other.
(Psalm 85:11 CJB)
For many, He is the god of anything goes.  This is not the one, true God of the Bible.  He is righteous and holy, and He wants us to be righteous and holy, too.  I pray believers will fast, pray, and repent, so that our prayers will not be hindered.

Posted by Gail Griner Golden at Gail-Friends at 9:48 PM