Only in the dark

I want y'all to see a beautiful flower that grows here on Florida’s Space Coast. For years I thought this plant was so ugly. It looks like green snakes growing on the palm trees along the Indian River. The flowers looked like dried up flamingo heads covered with grey hair. Ugly!

Well, one evening just after dark, I discovered that the ugly flamingo head had bloomed and it was spectacular! Some of the blooms are the size of soccer balls. Who knew something that I perceived to be so ugly could be so beautiful? 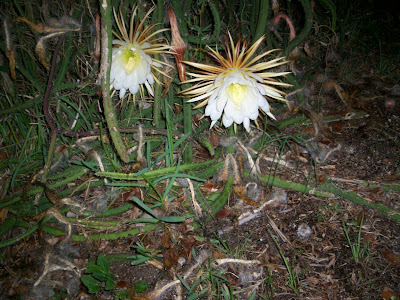 G-d spoke softly to me that the cactus is a picture of surrender to Him. Often hard times come into our lives. Hurtful things happen. Pain (both physical and emotional) visits us. We cringe from the ugliness of it. We run away from it. We want it taken away. If we surrender to G-d, something wonderful happens. The thing we thought was ugly becomes beautiful. We learn something about G-d that no one can take away

As an example, years ago I owned a house in another city. I wanted to sell the house and put it on the market. The house would not sell, however. I prayed, I cried, I told G-d I "needed" it to sell. I became angry and told G-d I felt He was doing me wrong. (Yes, G-d can take it when I don’t agree with Him.) It still didn't sell. I surrendered it to Him and accepted whatever the outcome might be. I put the house up for rent, and was blessed with an excellent renter who paid on time and kept the property in good condition.

Several years later, I desperately needed money, and put the house up for sale again. I prayed for it to sell quickly, and thanks be to G-d, it sold in one week.

I learned from this situation that what I thought was "ugly" was really beautiful. The house was preserved for my truly desperate need years later. G-d knew what he was doing. I learned also, that He knows my needs and provides them. I often think my "wants" are needs, but He knows best.

When troubles come into my life, I’m learning to surrender them to G-d. Surrender during dark times, like the cactus flower, seems ugly and frightening. Once I let go though, I discover a beautiful thing – something about G-d that no one can take away from me. I remember, that only in the dark, does the ugly cactus become a beautiful flower.

And we know that all things work together for good to them that love G-d, to them who are the called according to His purpose. (Romans 8:28)

Join us for Gratituesday at Heavenly Homemakers!
Posted by Gail Griner Golden at Gail-Friends at 10:55 AM