A Threat to America? 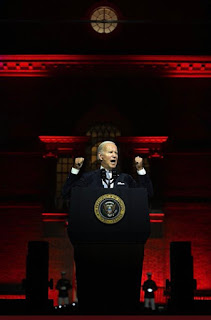 I woke this morning to learn that the current president hates me. Calls me a threat to America. I haven't listened to his speech, but my friend, Betty Jackson, shared her thoughts, and I agree:

www.bettyjackson.net
"Words matter.  (used with Betty's permission)
I was dismayed as we listened to news broadcasts last evening after the President had given his "Unity" speech. It was anything but unifying. Words matter. Attitudes matter. Our nation matters. I had trouble getting to sleep, even after Ev and I prayed about it. We are taught to pray for our leaders, and we do. But our hearts were heavy with the denouncement of all who refuse his progressive agenda with which we adamantly disagree. The last I heard and understood, healthy debate is what keeps this country free, and honest discourse allows for respect for others' opinions and viewpoints.
I abhor the idea that this administration is denying constitutional freedoms in the guise of either we all agree or we will destroy the opposition by using the power of government to do so. Our founding fathers are shivering in their graves that in eighteen months, and administration can run roughshod over the freedoms the nation has embraced. Words matter. Government does not subject its people to such rancor.
I respect the Presidency. I respect that an executive branch is necessary as a coequal. I admit that party loyalty takes over so that nothing much can get accomplished legislatively, and that the complexity of bills necessitates voting for or against the whole bill whether its provisions are good or bad. But characterizing a party and half the country's patriots as those to be hated is frightening. The President has the opportunity and the bully pulpit to unite us to fight the elephants (not the symbol of the GOP) in the room: illegal immigration, drugs killing our children, homelessness, crime, energy, inflation, corruption, etc. What good does it do to throw terms like ultra-maga (Make America Great Again) and fascist, a term we octogenarians know all too well by the setting behind the speech last night. The symbolism of uniformed soldiers and red and black sent chills through me. I've lived through the cold war, the communist era, and seen what socialism has done to the world's great nations. I watched in horror as cities burned because violence reigned instead of discussion and problem solving. I've seen the demeaning of officials by both political parties, and it hurts my soul. I've seen the justice system used to demonize, demoralize, and dismiss truth.
I'm praying for peace today."
I join Betty's prayer, and also ask you, dear Gail-Friends, to join us.  I also pray for national repentance - a return to obedience to Torah.  Righteousness exalts a nation!
Blessings to you all.
P.S. I've been working on several projects over the last few months, but I haven't forgotten y'all.  I'll b e posting more often in the future.
Posted by Gail Griner Golden at Gail-Friends at 3:26 PM