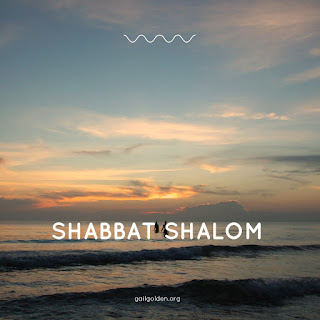 I'm always amazed at how Adonai brings songs to my attention each week.  This song, titled Psalm 34, is based on the following Psalm and is sung by the Brooklyn Tabernacle Choir.  What a great meditation for Shabbat.  I will read each verse and do what it says.  Then, I will write in my journal, remembering and recording the things He has done for me over the years.  Oh, how I can boast about Adonai.

For example, in verse five, "I sought Adonai and he answered me; he rescued me from everything I feared."  I could (and maybe should) write a book about how fearful I used to be.  It was a debilitating fear. Maybe it was a panic attack?  But I have not experienced anything like that in decades.  Why? Because I learned to push back the fear and meditate on the Scripture, "When I'm afraid, I will trust in Him."

I hope you'll try this exercise and let me know what you remember and record as you meditate on this beautiful Psalm.

Shabbat Shalom, Gail-Friends, and may your Sabbath rest be sweet.

Psalm 34
(1) I will bless Adonai at all times;
his praise will always be in my mouth.
3 (2) When I boast, it will be about Adonai;
the humble will hear of it and be glad.
4 (3) Proclaim with me the greatness of Adonai;
let us exalt his name together.
5 (4) I sought Adonai, and he answered me;
he rescued me from everything I feared.
6 (5) They looked to him and grew radiant;
their faces will never blush for shame.
7 (6) This poor man cried; Adonai heard
and saved him from all his troubles.
8 (7) The angel of Adonai, who encamps
around those who fear him, delivers them.
9 (8) Taste, and see that Adonai is good.
How blessed are those who take refuge in him!
10 (9) Fear Adonai, you holy ones of his,
for those who fear him lack nothing.
11 (10) Young lions can be needy, they can go hungry,
but those who seek Adonai lack nothing good.
12 (11) Come, children, listen to me;
I will teach you the fear of Adonai.
13 (12) Which of you takes pleasure in living?
Who wants a long life to see good things?
14 (13) [If you do,] keep your tongue from evil
and your lips from deceiving talk;
15 (14) turn from evil, and do good;
seek peace, go after it!
16 (15) The eyes of Adonai watch over the righteous,
and his ears are open to their cry.
17 (16) But the face of Adonai opposes those who do evil,
to cut off all memory of them from the earth.
18 (17) [The righteous] cried out, and Adonai heard,
and he saved them from all their troubles.
19 (18) Adonai is near those with broken hearts;
he saves those whose spirit is crushed.
20 (19) The righteous person suffers many evils,
but Adonai rescues him out of them all.
21 (20) He protects all his bones;
not one of them gets broken.
22 (21) Evil will kill the wicked,
and those who hate the righteous will be condemned.
23 (22) But Adonai redeems his servants;
no one who takes refuge in him will be condemned.
Posted by Gail Griner Golden at Gail-Friends at 3:25 PM