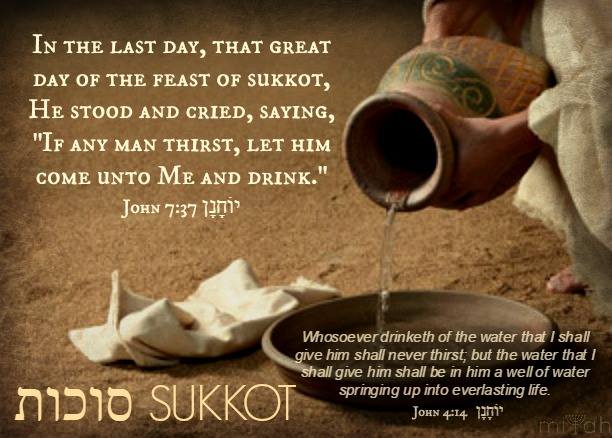 I shall never forget the first time I was impacted by this verse.  Growing up in a Baptist church, I was not taught about the Feasts and Festivals.  I didn't know that observing them was a commandment.  I didn't realize that Yeshua kept the Holy Days, either.

During the late 1990's I began to attend a fellowship that was called a Jewish roots church.  I attended a celebration of Sukkot in which this verse was acted out on stage.  The scene showed Yeshua attending the celebration in Jerusalem and after the water-pouring ceremony, He stepped forward and said, "I am the Living Water!"

I remember so vividly that moment.  Through that dramatization of John 7:37, I was connected to the Jesus who lived as a Torah-observant Jew.  I was overwhelmed with who He was.  I'd been following Him most of my life, and yet had been disconnected from what He did, where He went, and everything about His Jewishness.

That moment was a turning point in my life.  I began to learn about my Jewish roots and seeking wisdom about what I, as a follower of Him, was to be doing.  I felt a deep sadness that this truth had been purposely neglected in the churches I 'd attended.  I felt like I'd been robbed.

I began an in-depth study of the Torah, and then I re-read the Gospels of the New Testament.  It was life-changing.  I kept seeking to know Adonai's will and ways and learning from local teachers.  I was dissatisfied, however, because the local teachers did not really obey Hashem's commandments.  They observed a philosophy quite foreign to true Judaism. One, in fact, did not even observe the Sabbath.

I kept praying and seeking, and never dreamed G-d would bring me to my own personal rabbi.  Rabbi Jem and I were married in 2006, approximately ten years after I began my journey to Judaism.

I love the Feasts and Festivals of Adonai, and I'm sad that I didn't learn about them early on.  I encourage everyone to embrace the roots of the faith into which you've been grafted.  Follow Yeshua, our Messiah, and be blessed through obedience.

Here's a song we'll be singing this week - Sukkot Song - the Time of Our Rejoicing!
Yes, this is the time of our rejoicing - Sukkot - and did you know that this feast will be observed in Heaven forever? What a JOY-FULL thought!

We'll be worshipping, singing, praying, waving the lulav, dancing, and enjoying good food, as always!  Here's a dance video I hope you'll enjoy - Your Name by Zemer Levav  - and I hope you dance!

Chag Sukkot Sameach, Gail-Friends.
**To see our sukkah, click on this LINK.

Posted by Gail Griner Golden at Gail-Friends at 4:41 PM