Till The Storm Passes By 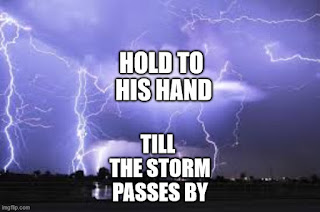 I keep hearing this song in my head.  I remember going through a big storm years ago, sitting in my rocking chair with my precious baby girl, Melissa, in my arms.  The storm was crashing all around, but my heart was at peace as I sang this song:  Till the Storm Passes By.

America is going through a storm right now -- as we prepare to determine that Trump will be the duly elected president.  Evil forces abound, but God is greater.  The evidence of fraud is overwhelming, but remember, this is a spiritual battle.  The evil one doesn't give up easily.

We were born for such a time as this to do the following:

" I recently emailed you about my concern over the Nov 3 elections. You responded by saying we need to let the process play out as prescribed by law.

You are missing the point completely. That process can not be followed when you have justices on the bench who refuse to even hear the cases. This is a miscarriage of justice in itself. I don't care if they don't want to get in the middle of an election, the problem is, there is ample proof in several states, laws were broken and the fair election process was not followed. But there will be no justice when the justices on the bench refuse to do their jobs.

That is where you should be stepping up and declaring you can not legitimize potential corrupt votes to be allowed through the electoral  process. You really need to see some of the accusations, military ballots with no fold lines, video (manipulated) proves ballots were scanned multiple times, win..dows blocked refusing clear transparency, observers denied access to view ballots meaningfully.

If it was a fair election, there would be no objections to forensic audits.

Please step up on Jan 6 and refuse to allow electoral votes to be cast from corrupt state elections."

** This  post is part of a series to encourage believers and also to defeat the spirit of heaviness.  Singing and dancing is part of spiritual battle that defeats the enemy of our souls...and the soul of America.  See the first post HERE.

Posted by Gail Griner Golden at Gail-Friends at 2:40 PM